Many men enjoy a visit to the neighborhood barbershop. It isn't just a great place to get a haircut and a shaved. The local barbershop has always been a place of camaraderie, laughter, and good old-fashioned friendship.

Most people have no idea about the interesting history of barbers and barbershops. Dating back to 5000 B.C., members of Egyptian royalty acted as barbers, cutting hair with sharpened flint pieces and oyster shells. These Egyptian barbers also served as religious priests. This was due to a common belief at that time that evil entered the body by way of the hair and therefore could only be banished by cutting the hair. These barbers also performed religious ceremonies such as baptisms and marriages. 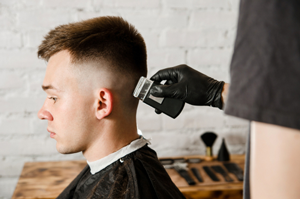 They were also known for performing an ancient procedure called bloodletting. This practice involved cutting the patient in order to allow any illnesses to "bleed out" of the body. The "barber-surgeons" would even place a bowl containing their patients' blood in their shop windows as a way of advertising their services. This continued until the year 1750 when a law was passed separating the medical, dental, and barbering professions completely.

A reminder of those days still exists to this day, and it is a popular one, even if most people don't know what it represents. The barber pole symbolizes the fact that barbers also once served as surgeons and dentists. The red stripe on the pole symbolizes the blood, the white stripe stands for bandages used to dress wounds, and the blue stripe represents the veins within the body. the barber pole was created after it became illegal to advertise these services with a bowl of blood in the window in 1307 when the barber-surgeons needed a new way to let the public know who and where they were. Since most people back then were illiterate the idea of a visual representation of their services was born. The downward spiral of the barber pole also has a special meaning: it represents the aortic blood flow as it moves downward through the body.

The formal trade of barbering began in the United States in the 19th century. The first barber school was founded in 1893 in Chicago, Illinois by A.B. Moler. The same year, he wrote The Moler Manual Of Barbering, the first ever textbook on the subject. He went on to franchise the Moler Barber College in St. Louis, Missouri in 1899. In 1965 A.B. Moler was inducted into the Barber Hall of Fame.

Today, the barbershop continues to evolve and grow in different directions, providing many more services than the traditional haircut and shave. Even the design of barbershops has changed. Themed shops are now among the most popular, providing a natural, outdoor-themed experience, a full-service kitchen serving food and drink to customers before or after their services are done, even "adult-themed" shops with scantily-clothed female barbers - an idea that combines the sexy waitresses a la Hooters and a gentleman's club, of sorts. All of these barbershops prove to be extremely successful, a unique departure from the usual barbershop. The future will no doubt see more and more creative additions to the profession that began so humbly, with sharpened rocks and shells.